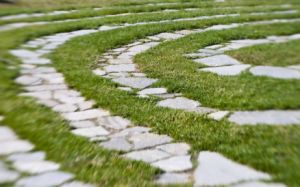 During a recent walk with my Charlotte Labyrinth Walks Meetup group, I noticed that one of the walkers did something unusual:  he entered the labyrinth and walked straight into the center, where he remained for quite a while.  He then walked out of the center, following the path outward.  Shortly thereafter, he turned around and followed the path back into the center.

I usually start off the walks by telling people a bit about labyrinths and always remember to say that there’s no right or wrong way to walk a labyrinth.  And yet I found myself looking at what “the guy who ignored the path” was doing, wondering why he chose to do it a different way, and what that was about.

When we gathered in a circle after the walk, I told him I’d noticed.  He said he felt a very strong pull to start at the center, and then go out into the world, so to speak, and then back to the center.   “Why wouldn’t I want to go to the center first,” he asked.

It’s never occurred to me to do that.  I want to try it the next time I’m in a labyrinth.  And, I’m going to take some time to think about where else in my life I’m blindly following some path because that’s the way I’ve always done it, or have been taught to do it, or because others are walking a certain way.

After all, isn’t it a good idea to get centered, to ground oneself in peace before heading out into the world?  For some of us, it just makes more sense to turn a traditional path “backwards.”  I’m grateful for his lesson.

Where in  your life could walking in a new way provide some new perspective?

← New to the Labyrinth?
It’s All Ephemeral →