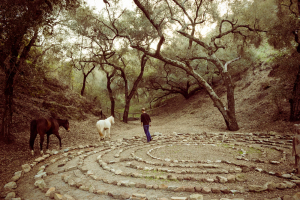 In 2013, I had the opportunity to build a labyrinth on Martha Beck’s North Star Ranch in Central California.  With the help of some friends on her ranch, I laid out a pattern and my helpers and I laid stones we’d gathered from all over the ranch as well as the surrounding area.  I love all my creations, but this one has always held a special place in my heart.  Since I live on the other side of the country, I’ve only had a chance to walk it a time or two since it was created.

Last time I was there, Martha apologized for the condition of the labyrinth.  She was worried that I’d be disappointed by the amount of leaves and twigs along the path, or upset that some of the rocks that had been kicked by horses.   I reminded her that labyrinths, whether indoor or outdoor are pretty ephemeral; they change in nature with each walker’s steps (and energy), and even more so BY nature.  Horses, squirrels, deer, fox, bears and many other creatures make their way through the arroyos of North Star Ranch.  They all leave their mark, just like the ancient fossils found in the rocks that border the labyrinth’s path, changing it as they walk through it in their own way.

Martha recently decided it was time to sell the ranch and move on.  She created this video to share a story about some of the magical experiences she and others had there.  The first thing I noticed when seeing the labyrinth was the grass.  I’d only been there in either summer or during a severe drought.  It was amazing to see all those new, green blades growing in the center of the labyrinth and along its’ sides.  Some people might be upset by the “mess” of it, but not me.  The labyrinth’s just doing its’ job, quietly supporting life – spiritually and ecologically – just by its’ presence.

I wonder who will next live at the ranch, and who will walk the path we created.  I’m sure the labyrinth they find there will look different than it looks today, and I’m glad for that.  Stones erode, mulch fades, grass grows or dies, twigs fall…it’s all as it’s supposed to be.  The labyrinth will live on in whatever form it’s meant to, for as long as it’s meant to.  Kind of like us.