Posted on February 22, 2020 by Christina Brandt 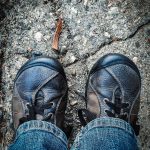 I led a group of walkers in the labyrinth at Morningstar Lutheran Church.  It was in the 40’s and people were bundled up tight.  This intrepid group came because they wanted to feel the power of peace that came over them in prior walks.  The “newbies” were there because their friend said the labyrinth would surprise them.

We wrote about what we’d like to let go of to make room for wonder, for peace, and for all the things life is really supposed to be about.  After (safely) setting fire to what they’d written, the walkers set foot on the winding path.  I walked clockwise around the lunations of the labyrinth, holding and containing space for their journeys.

As we walked, I noticed the slight tinkling of the wind chime high in the trees.  I felt the crunch of leaves underfoot.  The air was brisk.  I heard the swish of people’s arms against their jackets, and noticed everyone slowing down as they moved further into the labyrinth.  As they stood in the center, I felt such satisfaction in knowing that the labyrinth was doing its job – allowing everyone to have the experience they were meant to have.

As the walkers worked their way back out, I switched direction and walked counter-clockwise to shift the energy back toward the outer world. Each person turned and stood for a moment to acknowledge what they’d received as they walked, then sat down to quietly reflect until everyone was finished walking.

When we settled down for a chat, one walker said she’d been “pushed out” by the labyrinth, ending up back at the entrance far sooner than she expected.  She said she’d asked a question and gotten an answer quite quickly, but didn’t like the answer she received.  When she started  over in the labyrinth, she again found herself having taken a “wrong” turn somewhere and was back at the entrance quite quickly.  As my teacher likes to say, “everything that happens in the labyrinth is a metaphor.”  When I asked her where in her life she was experiencing this same phenomenon, she laughed.  The labyrinth did its job.

Another walker said she’s been holding onto something at work – something annoying that she wanted to release.  As soon as she burned her written statement, she felt free and was able to enjoy some calm and freedom as she walked.  The labyrinth did its job.

The labyrinth always does its job which, as I see it, is to allow us to bring what we need to let go of, to examine or to ask for help with along for our walk.  The group is silent, but messages always come, probably because we’ve slowed down enough to notice what life’s been trying to teach us all along.